A few days ago while I was passing by Joe’s office I saw Jim through the glass window standing in the middle of the office, starring at the ceiling. He looked as he was doing something important so I decided to have a chat with him and see what he is up to. I walked in the office and I started teasing him.

Hey man! What are you doing here? Practicing yoga? – I said and it seemed as he was surprised by my presence and my questions in general.

He looked at me at mumbled quietly. At first I couldn’t understand a word he was saying so I asked him to please repeat what he has said and to speak up so I can understand. The second time he said:

– Counting? Hm… What are you counting? Sheep? Me, again trying to tease him, but it didn’t look as if he was willing to play my game. I couldn’t get a smile out of him. He was calm and showed no interest in my comments.

A few moments later he mumbled again – No, ceiling tiles.

This got me even more confused. Why on Earth would somebody be counting ceiling tiles? And while I was trying to process the new data in my mind and to find a reasonable explanation for this confusing answer, Jim mumbled again as if he has read my mind and continued on to explain why he was counting the ceiling tiles. He said that he has now realized that the number of ceiling tiles in his office is half the number in this office, thus his office is half the size of Joe’s office. I could sense by the tone of his voice that he was upset. Why wouldn’t he be?! He and Joe were on the same level in the company’s hierarchy, got the same pay but yet had different offices. Any way you looked at it, it seemed unfair.

Still I had to pretend this was not a big deal and to convince Jim that he is exaggerating. I had to give my speech on how we try to give everyone equal treatment but deep down I knew that my speech would mean nothing to him. To be honest, even I wasn’t buying my speech. He was frustrated and I could see that nothing I say would make a difference. Not to mention the fact that I felt guilty as I was the one who gave him this office he now hated so much. Frankly, I would probably hated it myself if I had to be working in it every single day. Apart from being so small in size, it had a crappy view of the parking lot, unlike this other office that overviewed the entire city and had a breathtaking view. 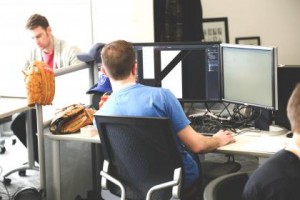 In my defense, Jim deserved that office. He was never one of those people who tried to go above and beyond to meet the requirements and prove to the management that they are a real asset to the company. He was what I would say to be an average worker. He delivered what he was expected to deliver, and that was all. I’ve always appreciated overachievers. I couldn’t do much for them as my possibilities were quite limited but I could do something small – like give them a bigger office. Why not if that is what they deserve?! You see, I’ve been thinking about something.

Jealousy can be a very dangerous thing. It defines how we see things and how we act in our everyday life. Although not many of us would admit, we often compare things in our heads, sometimes offices sometimes something else but we tend to believe that the grass is always greener on the other side. So what happens when you acknowledge these feelings? Is there any way we can put them under control? If we allow them to take over then we are in trouble. We would be miserable all the time and with each passing day we would hate everyone around us until we eventually start hating ourselves.

We can’t deny that small things count. Sometimes even such miscellaneous things like the number of the ceiling tiles can be important. It denotes power and allows the individual to have more influence over the surrounding. These things are important, unless when they are not.

Some people like to keep a low profile. They are well aware of their power and their influence but they choose to lure from the shadows. Look at the great Roman emperor, Augustus. He knew how great he was but he chose to keep it low and wait for the right moment to shine. He was simple and in a way modest when it came to his power, but still he was able to do much for his people.

However, I wouldn’t recommend you to be the next Augustus. Only a few can pull that off. Whoever tells you that the size of the office doesn’t matter, they are lying. Unless you are an emperor, you have to fight for your integrity and obtain the power you deserve. If that means having a big office then so be it. Your boss will often try to convince you otherwise, especially if they are aware of their budget limitations or in the options they have to offer. They will never tell you that they believe you deserve more.

But you have to know how much you are worth. If you don’t value your work, don’t except others to do so. If you can get a bigger office, fight for it. Remember, at the end of the day regardless of what others say, when it comes to your office, size really matters.